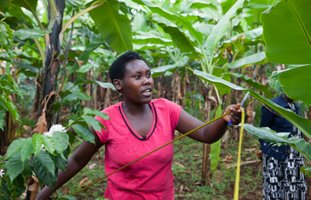 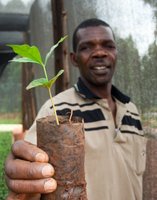 For many, Uganda might not the first country that comes to mind when thinking of high quality Arabica: the country has been traditionally known as a producer of Robusta. However, in many regions of the country the challenges are more a matter of infrastructure, history and knowledge than environment. One such area is the West Nile sub region (previously known as a Province), high in the Northwest of the country, bordering the Democratic Republic of Congo, where Arabica coffee is grown at 1,450 to 1,800 meters above sea level. This region’s ideal natural conditions have the potential to produce stellar speciality coffees and transform the lives of farmers accross the region.

Kawacom initiated their White Nile Organic Coffee project in 1998 in an effort to harness this potential. By promoting the cultivation of Arabica coffee, training farmers in agricultural techniques and best practices, educating widely regarding the importance of harvest and post harvest activities, and building top-notch washing stations, the project hopes to put Uganda ‘on the map’ as the next big destination for speciality coffee. So far, the successes have been multiple. In 2003 the project received its very first Organic certificate – an accomplishment that has, over the years, attracted UTZ and Rainforest Alliance certification schemes. Today, the project has expanded significantly, thanks to these successes, and reaches 8,000 smallholder farmers, many of whom not only receive higher prices for their higher quality coffee but also participate in other social and environmental programs and Kawacom’s cash-management project.

The White Nile project gains its name from the famous Murchison Falls (Kalangala in local dialect), which lie only a few kilometres away. It is here that the mighty River Nile squeezes itself into a 7 meter volcanic rock stretch, forming white foam as it proceeds, hence turning into a ‘White’ Nile as it pours into Lake Albert.

Kawacom has heavily encouraged renovation activities amongst project participants and has, for the past several years, distributed approximately 150,000 coffee seedlings annually to its partner farmers. Distributed varieties (including SL14) are well-suited to the climate of the region and produce high cup quality.

The primary pruning is done in December & February after harvesting, whereby dry branches are removed as well as unproductive and diseased branches. Stumping of old, unproductive trees is also conducted during this time and is a key tool for improved productivity. Other types of pruning, which help select productive branches, improve airflow and limit disease, are undertaken throughout the year, as well.

Soil fertility is maintained by regular applications of composted manure and by establishing cover crops. No synthetic fertilisers or pesticides are used. In order to control pest damage, chillies, wood ash (containing potassium), marigold and animal urine are used.

During the harvest season, Kawacom encourages farmers to deliver cherry to their new, state-of-the-art wet mill instead of hand pulping on their farm. This has given the project increased control over processing activities, which can be challenging in the region as rains during the harvest season are common.

All coffee is selectively hand-picked and is delivered by individual farmers to one of Kawacom’s collection points. These collection points deliver all cherry received at the end of each day to be pulped at the central mill, and lots are defined by sub-regional origin and altitude. Upon arrival at the mill, the coffee is then sorted again to remove any remaining under- or over-ripe beans, and after sorting, the ripe coffee cherries are delivered to the mill’s Pinhalense pulpers. After pulping, mucilage is mechanically removed, the parchment is soaked in tanks for 12 hours and is then either delivered to dry in beds in the sun (very low quantities due to seasonal rains) or dried at low, constant temperatures in mechanical driers that are fuelled by dried coffee husks.

Kawacom extension workers continuously work to sensitise farmers participating in the project to youth and gender issues, to raise HIV/AIDS awareness and to provide education in finance and savings management. The project has also established a training centre to train farmers in all issues relating to Good Agricultural Practices and climate change mitigation and adaptation. Furthermore, Kawacom runs a Gender & Youth Initiative that promotes entrepreneurial training and opportunities for local youth.

Kawacom has also worked to establish ecological awareness programs, such as preventing deforestation by encouraging and financially facilitating the implementation of energy efficient cooking stoves that use bio-gas for fuel. They are currently investing in rainwater harvesting tanks that will be installed at farmers’ homes to collect rain water for domestic use. 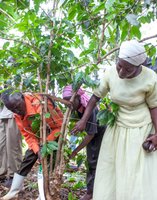