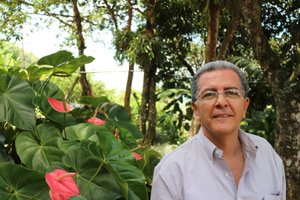 Processing: Fully washed and dried under shade on parabolic beds 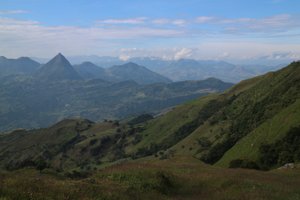 Visiting Cocondo, near the small town of Titiribí in Antioquia, you’d be forgiven for thinking that the farm’s name is a play on words inspired by Macondo, the mystical town where Garcia Marquez´s famous novel, A Hundred Years of Solitude, takes place. Indeed, the setting is magical….and real! However, Luis Emilio Velez, the owner, will explain to you that the farm’s name derives from its location. Nothing more. Although the farm’s real name is Tebaida, many years ago villagers gave it the name Cocondo, an abbreviation of ‘coco hondo’, which literally translates as ‘deep coconut’. This strange moniker refers playfully to the farm’s location in the lower part of a steep ridge that looks not unlike a hollowed out coconut when viewed from above.

Getting into the hollow of this particular coconut isn’t easy: the road has a grade of 35% at its steepest point, which means that a four wheel drive vehicle is necessary to even think about making the trip. However, upon arriving, the visitor is rewarded with a truly magical view. The farm’s various thermal layers dictate what is grown at each point along its total 23 hectares of steep terrain. The higher elevations are covered by dense natural forest and lower elevations are planted under coffee but with an eye to maintaining biodiversity. Luis is a committed practitioner of permaculture, an environmental and ethical philosophy developed in the late 1970s that gives precedence to nature’s cycles and takes an adaptive (rather than prescriptive) approach to agriculture. His goal is to eventually adapt fully to this creed, achieving 100% self-sufficiency and sustainability for the farm, although he admits it no easy task. At the very least, his commitment to sustainable practices has led him to achieve the only organic certification in the whole state of Antioquia – itself no small feat.

When Luis converted to organic production 15 years ago, productivity did decline, he admits. However, from that point he’s been able to increase yields year upon year as he learns to manage the farm and schedule fertilisation without resorting to chemicals. Luis insists that long-term erosion and acid soils (from overproduction) are the coffee farmer’s worst enemies and following nature’s wisdom and schedules are the secret to their defeat. He knows he will never achieve the yields he experienced before going organic, but he weighs this against the benefits of keeping his farm free from chemical inputs. This goal is becoming more important, as he plans to retire from his other job as Titiribí’s doctor in 3 or 4 years, at which point he will dedicate himself entirely to the farm.

Luis didn’t begin life as a coffee farmer. After university, he had bought a cattle ranch in a town called San Pedro where he had begun working as a doctor – some two hours from Medellín. His family and especially his father kept pressuring him to sell the farm and move ‘home’ to Antioquia’s southwestern mountains, where “he knew the people and was known too”. One day his father invited him to go see a farm in Titiribí that was up for sale. Luis was completely disinterested. However, on the journey up the mountain, the views captured his attention and by the time they arrived at the farm he was enchanted. He says “the other people were looking at the farm – which already had coffee - and negotiating. I was just looking at the views, completely amazed.” The rest, as they say, is history.

Cocondo’s main house is the farm’s original structure and was built in the early nineteen hundreds when Titiribí was a major mining powerhouse, home to the biggest gold mine in Colombia. The house was built with tapia - mud laid upon an underlying wooden structure, similar to adobe – a very common building practice for bigger houses in the turn of the 20th century. The walls are thick and can last for ages.

Surrounding the house, Luis and his wife have established a rich assortment of flowers, fruit trees and even a small concrete pond built for red tilapia, a freshwater fish that grows easily and feeds off a plant called Azolla, rich in protein, which grows like weed on the surface of water. The fish eat the plant from the bottom and what is left is eventually used for compost. The farm is also home to chickens (of course!) and around 50 pigs, who do little for business (the price of pork goes up and down even more than that of coffee) but pay their way through marranaza (pig manure) donations, which keep the farm’s organic soils rich.

Coffee at Cocondo is harvested and sorted by hand and is then left to ferment slightly, still in cherry form, for around 18 hours. Luis posits that this method of pre-fermenting, enabled by the cool climate, prevents pre-aging. The coffee is then de-pulped, fermented for around 24 hours and is then fully washed and dried in parabolic beds (hoop houses) under shade for an average of 20 days at a maximum temperature of 35 degrees. With increased production, Luis is quickly running out of space to dry his coffee, so he has recently built new drying beds and plans to build more soon.

The farm’s ‘compost factory’ (so important to maintaining yields when producing organically) is located near the wet mill. The factory consists of several deposits of organic waste from the farm, from neighbours, and even from friends in Medellin. This waste starts to decompose and is eaten by worms, which in turn produce hummus - rich worm manure that, again, helps soils and productivity. Luis admits that he cannot produce nearly enough organic compost and humus to keep his plantations going. He has to purchase hummus in Medellin and is now also experimenting with volcanic pulverized rock. These minerals are helping him keep his trees healthy as they work their way into the soil near the root of the trees that is rich in microorganisms, helping the tree absorb nutrients faster and more efficiently.

As mentioned, Cocondo is the only certified organic farm in Antioquia, one of the largest coffee producing states in Colombia with an annual total production of 2,000,000 bags. It wasn’t always this way. When Luis initially achieved certification, four other farms went organic as well. Today, only Cocondo survives, as the others have taken out their coffee plantations or gone back to chemical fertilization. In fact, Luis is more than surviving. He has put his son and daughter through high school from the farm’s profits and is able to provide employment for two permanent employees and up to seven seasonal contractors. An additional 10 people are given work during the harvest.

This all speaks volumes as to Luis’s commitment to organic farming, particularly considering how difficult it is to commit to 100% organic coffee production in Colombia these days. It is Mercanta’s commitment and pride as specialty coffee merchants to develop the commercial relationships needed to guarantee long-term sustainability to projects like Luis’s. 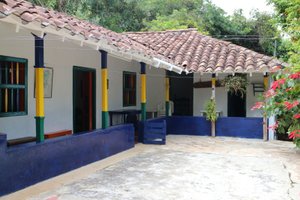 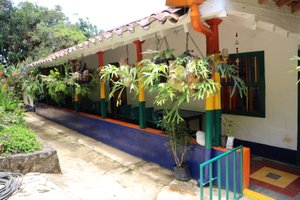 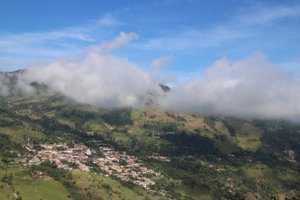 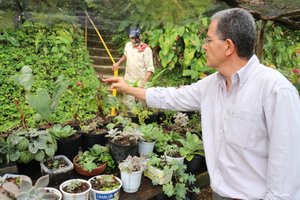